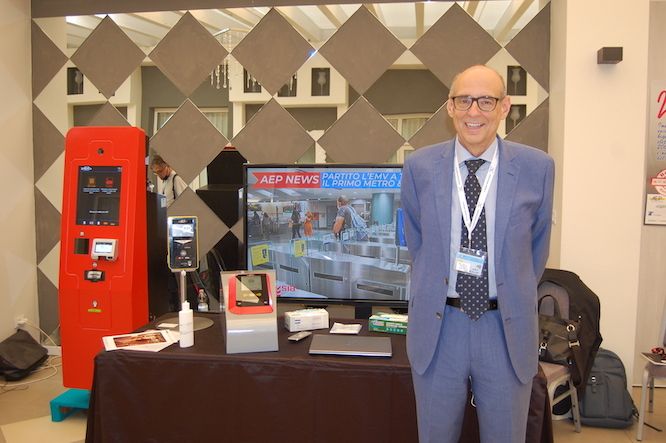 Emilia-Romagna: the bus will be paid by credit card

The solution is by AEP, which has signed contracts with  Seta (Modena), Start Romagna (Rimini), Tep (Parma) e Tper (Bologna)

Soon there will be a revolution on the buses of Emilia-Romagna. The novelty will concern the system of purchase on board of virtual tickets. It will take place using a contactless EMV bank card, initially belonging to the Mastercard, Maestro, VISA and V-Pay circuits (others may be added later). To realize the system and related equipment is the Florentine company Aep Ticketing Solutions Srl. The company has signed agreements with Seta (Modena), Start Romagna (Rimini), Tep (Parma) and Tper (Bologna). The contracts are related to the public tender for the supply of the EMV electronic ticketing system that will equip all the buses of the four companies. The design phase has already begun and is proceeding very quickly, with the aim of bringing the solution into the field already in the first part of 2021.

A few more details about the project

The new system will follow the Transport for London model and will automatically calculate the best fare based on the traveller’s trips. The new validators, model Futura 3B of AEP, will be able to validate the current cards already in use, “smart” paper tickets with QR-code and App on smartphone, reading the screen. The supply also includes the web portal for the online purchase of tickets based on QR-code and the subsystem dedicated to inspectors.

To trace an overview of the work done by the Florentine company (in Signa, Fi) is the CEO Giovanni Becattini, in Bologna during the event organized by Club Italia to celebrate its twenty years. “We are extremely proud of this work – said Becattini – We are working with four companies that are certainly among the best in Italy (and not only). It is a great honor to be at their side in this project. We will make every possible effort to ensure maximum satisfaction from our customers and of course also from travelers”.

The company’s work in Italy and abroad

AEP Ticketing Solutions is specialized in the realization of electronic ticketing systems in Italy and abroad, especially in France. It is a pioneer company in the realization of “Cashless” systems on board of vehicles. There are over 25 systems, including those installed and operating between Italy and France and those already in order. AEP’s solutions are not limited to “Cashless” systems, but include all the types that are now at the forefront. In detail, contactless cards and tickets, tickets with QR code, dematerialized tickets on smartphones, “Card centric” and “Account based” systems.

«We are delivering our solutions everywhere. Thanks to Aep, Tuscany is today, for example, the most cashless region of Italy – explains Giovanni Becattini -. With Ataf in the province of Florence we inaugurated last summer the new cashless ticketing system. This innovation allows travellers to buy the bus ticket on board, using any contactless credit card. We then installed the service to Siena last September and to many other areas managed by Tiemme. Ditto for Lucca last October, with the urban service of CTT Nord. In November the payment of the cashless ticket passed to the whole CTT North basin of Livorno and in December on 42 Tiemme buses of the urban fleet of Arezzo. 2019 ended with the second place in Cannes at the Calypso Networks Association Awards for the ET-BLU project, which competed in the Best Innovations category. In July we inaugurated in Turin with GTT the first case of contactless payment with integration between metro and surface lines. Now we also aim to spread our payment system in Emilia-Romagna as soon as possible».