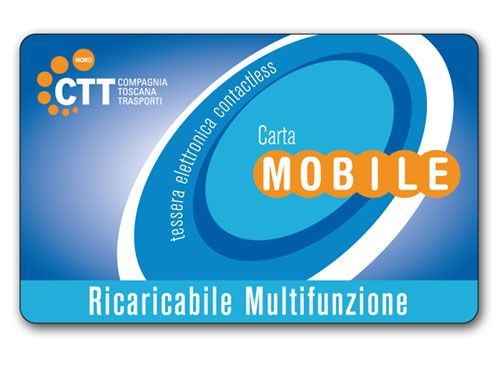 ET – The Easy Ticketing in Pisa too

After the success obtained in Prato at CAP, CTT/CPT Pisa too adopts an AEP solution by launching the Carta Mobile, a personal, electronical, rechargeable, contactless, multifunction card, born from the experience with the same name of CAP Prato, based on Calypso technology.

The new e-ticketing system is strongly in accordance with the new way of accessing the busses. Boarding is exclusively allowed from the front door, identified by green color. There are two validators and they are placed near to the entrance, one is placed just closed to the driver and the other behind him. The exit from the bus is permitted only from rear door(s), identified by red color.

Carta Mobile has to be validated every time you get onboard on buses, even if you have already got a ticket season.

From Autumn 2017, all ticket paper will disappear except the 70 minutes urban ticket that will be available for purchase at a price of 1.40 Euro. The contract could be purchased on the buses from the driver at a price of 2.00 Euro and will be produced as a ticket by the new onboard devices.

To guarantee gradual approach and progressivity of the project, during next months, the information campaign will be facilitate by the presence of 10 facilitators in ticket offices, at bus stops, on the buses easily recognizable by a colored bib. Facilitators will help and support travelers to understand the practical use of new electronic device and will be available to solve each doubt or perplexity. In synergy with the City Council of Pisa, a communication plan by offline, online and social means has been established to guarantee complete and continuous information.

CTT Nord President Andrea Zavanella states: “The introduction on the urban service of electronic money represents an important technological breakthrough for the company that demonstrates, in fact, to be not stationary. An important investment that gives CTT a modern system of commercial interface with customers that will bring to the gradual extinction of paper tickets. Citizens, especially the younger ones, will appreciate the convenience and versatility of “Carta Mobile”. Access only from front door and obligation to “beep” the card at every boarding have the ambitious target to initiate a gradual cultural shift in the use of public transport, introducing the phenomenon known as “social control”.