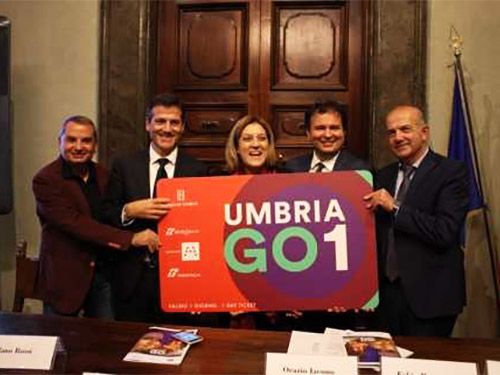 ORVIETO, dec 19, 2017 – The Umbria.GO subscription is aimed at those who regularly travel in the region using the various TPL companies and allows the use of regional trains, city and suburban buses, the Minimetrò of Perugia, the motorships of Lake Trasimeno and the Orvieto funicular.

The subscription is valid for all public transport services operated in Umbria by the FS Italian Group. This new service comes about two months after the launch of the Umbria.GO ticket (mainly dedicated to about 2.5 million tourists who every year choose Umbria as the destination of their trips) was presented yesterday in Perugia by the President of the Umbria Region Catiuscia Marini, the CEO of Busitalia Stefano Rossi and the Director of the Regional Passenger Division of Trenitalia Maria Annunziata Giaconia in the presence of the Regional Councillor for Transport, Giuseppe Chianella, the Regional Director of Umbria Busitalia Velio Del Bolgia and the Director of Trenitalia Umbria Bruna Di Domenico.

The Umbria.GO subscription has been presented as a real free circulation card for the entire Umbrian territory; that is, without the constraint of specific relationships, which can also be used in free time, beyond the usual itineraries of home-work trips, leaving the car parked in the garage. The objective is to promote, according to the 2017-2026 Industrial Plan of the FS Italian Group, integrated and sustainable collective mobility by facilitating modal exchange between the various means of transport and offering customers a unique travel experience. There are three types of subscriptions – Umbria.GO 30, 90, 365 – relating to the days of validity of the subscription: 1, 3 and 12 consecutive calendar months. In this launch phase, subscriptions will be offered at a promotional price of €120, €325 and €1080 respectively. The title is personal and non-transferable and must be validated the first time it is used.

The subscription will be on sale from January at the Busitalia and Trenitalia ticket offices in Umbria. “Umbria.Go is a further step in a teamwork that tries to respond as best as possible to the transport needs of Umbrian citizens and the potential offered by the Umbrian territory”, as the new integrated subscription dedicated to commuters that puts together all services for those who regularly use trains, buses and city buses, the Minimetrò of Perugia, the motor ships of Lake Trasimeno and the funicular of Orvieto, was defined by the President of Umbria Region Catiuscia Marini.

President Marini finally announced a press conference for next Wednesday, together with Trenitalia CEO Orazio Iacono, “which will be dedicated to the theme of Frecciarossa in Umbria”. Satisfaction for the start of the new subscription system was also expressed by the Regional Transport Minister Giuseppe Chianella who emphasized “the importance of integration in transport systems and the sustainability of the formula identified that, among other things, within two years, will also provide a fully digital subscription system. The Umbria.go subscription is aimed at those who regularly travel in the region using the various local public transport compagnies – all managed in Umbria by the FS Italian Group – and allows the use of regional trains, city and suburban buses, the Minimetrò of Perugia, the motor ships of Lake Trasimeno and the Orvieto funicular.

AEP has developed the Electronic Ticketing Systems of Busitalia (ET – The Easy Ticketing) and Minimetrò, as well as all the contactless and magnetic validators of the regione (Futura 4/MX and Futura 4/MX*EPU).