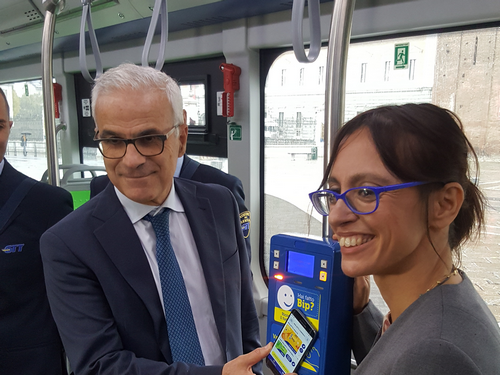 TO Move is based on VTS and is immediately a success

Turin, 03.10.2018 – TO Move, the GTT App, was officially presented on October 1st, through which users can buy tickets, validate them on board using validators and perform other functions. On the second day, more than 5,000 people have already downloaded and installed it.

The ticket can therefore be bought at any time and place, even at the stop. “From today – said the transport commissioner Maria Lapietra – we can think of changing public transport in Turin“.

“After a few months from the fare reform – declared Giovanni Foti, GTT CEO – we inaugurate a new reading tool of Bip card and quickly and easily tickets purchasing, which supports those already in use. We think in this way to meet the expectations of customers who ask us to know quickly the content of the smart card and more flexibility in purchases. We are planning further initiatives to improve the relationship with customers”.

TO Move is available from October 2 on Google Play Store and soon on the GTT site. At the moment it is compatible with Android phones equipped with NFC, from version 4.4 to version 8X and allows buying:

Once you download the App, you must enter your personal information before purchase, paying by credit card or prepaid. The card can be stored so as to avoid the hassle of re-entering the data at each purchase.

To validate the ticket purchased with TO Move simply bring the back of the smartphone to the validator. The expiration time of validity of the ticket will appear on the App.

TO Move was created by GTT using AEP VTS technology for primary functions (purchase and validation, not for card reading).

“It is with immense joy that we see our VTS technology, currently under patent, applied for the first time“, declared Eng. Giovanni Becattini AEP CEO, “a technology designed to allow the construction of applications independent of specific Electronic Ticketing Systems. VTS is an important part of the future of AEP. This opportunity has allowed us to see the results of years of study transferred in practice and to obtain important confirmations of our expectations, also through the analysis of user feedback.”

Some brief notes for insiders: TO Move is already giving excellent results today October 3, customers are purchasing and validating without any problem. However, the following is noted: