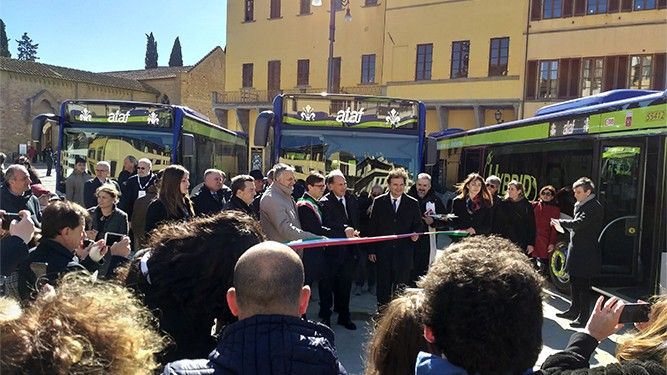 February 23, 2019  30 new Mercedes hybrid buses from ATAF were presented today in Piazza Santa Croce in Florence: the vehicles are the hybrid version of the 12-metre Citaro C2 bus already in use in Florence in the diesel version.

With the 30 hybrid buses, 60% of which are financed by the Region of Tuscany, 197 are the new buses that ATAF, the Florentine transport company, directed and controlled by the FS Italiane Group, has put into service for public transport in Florence in the last 5 years with a fleet renewal of 55%. For example, during peak hours, more than 73% of the service is provided with the latest generation vehicles.

“The flagship of the FS group.” comments Gianfranco Battisti, CEO of Ferrovie dello Stato, “we care a great deal on Florence, one of the most fascinating Italian tourist cities where we are present with our services. Adding to trains a system of integration and mobility of local public transport so advanced is a feather in the cap for Ferrovie dello Stato. I thank the drivers of ATAF, because the quality of the people and the professionalism of those who work in this company, together with the great human value and the daily commitment to corporate values, is a great merit that makes the whole FS Italian Group strong.”

The new buses, equipped with Futura 3B e F240B, are integrated in the electronic ticketing system based on ET – The Easy Ticketing by AEP.

In the last five years, 197 new buses have been put into service by ATAF.  “Thanks also to these new buses we will be able to further reduce carbon dioxide emissions, which is one of our objectives”, said Mayor Dario Nardella.