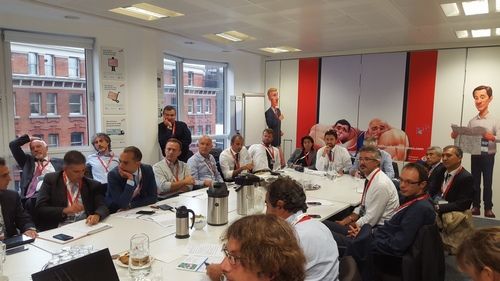 AEP Ticketing Solutions  has participated on Sep 16th 2015 to the visit to Transport For London (TFL) organized by Club Italia, aimed at understanding the process which has driven the acceptance of contactless  EMV credit cards in addition to the popular Oyster Card.

The visiting team has been warmly welcome, thanks to the perfect organization  coordinated by Claudio Claroni, the Director of Club Italia. The visit, with over twenty participants from the Transport Companies and their suppliers, has been very interesting and has helped understand this huge organization which employs some 85.000 people.

TFL has invested over 60 million Pounds to integrate their existing system with the so called contactless system which in reality means “use of EMV credit cards to access and pay the public transport” (the Oyster is indeed a contactless card but everybody simply calls it Oyster). The investment has yielded a cost reduction of over 80 million Pounds yearly, with a rewarding feedback from the customers. In its first year the system could then boast a profitable balance sheet.

Gianni Becattini, AEP CEO, has commented: “AEP firmly believes that the EMV contactless acceptance will gain share in the Public Transport and is heavily investing in developing new products which will be launched within Q2 2016“.